Apart from the Good cultures in Africa which help to maintain law and order
in the communities and ensures healthiness and happiness of the people,
here are more bad cultures which bring grief and
sadness to the people.


Widow inheritance....., also known as bride inheritance, where widows are made to marry a kinsman of her late husband, often his brother. This is still being practised in many parts of Africa today. This is not entirely bad in that it ensures protection and provision for the widow and her children after the husband dies. But the bad thing is that most cases the widow is forced to marry a kinsman against her wish and any refusal is met with grievous punishment. Let’s not forget the fact that some evil kinsmen, seeing that the woman is beautiful, may plan to kill the husband so as to inherit the wife. If the widow refuses, she is accused of many things, including killing her husband

Killing Of Albinos And Hunchbacks….. Albinos are people, who lack some kind of pigment in their skin and appear pale, the condition is actually a disability. Hunchback, on the other hand, is a kind of disability where some people have heavy swelling on the upper part of the back. People who have this kind of disability in Africa are regarded as outcasts and in many communities killed. This makes them to hide from people, especially the hunchbacks who do not come out in the night.

The killings of these kinds of people are not because it is culture but in some ways are cultural related. There are some primitive, supernatural beliefs attached to them that make some wicked men to hunt them. In Tanzania, witch-doctors say they can use albino body parts in a potion to make people rich or for good luck. Some think albinos are a kind of ghost-like creature, while some are convinced that there are magical properties in the blood, bones and skin of the albinos. The hunchbacks are also affected by this superstitious belief. Some people think that the swelling at the back can be used by witch doctors to make people rich, so they are killed and swelling taken out for the charm. 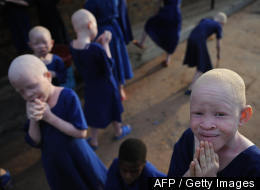 This has created a sickening black market where the body parts of albinos and hunchbacks can bring in anywhere from $500 to $2,000. In a part of the world where the per capita income is roughly $450 a year…I mean, think of the effect. This has made the albinos and the hunchbacks to hide from people, especially in the night.

..........Remember, I am not writing this to make it look like Africa is so bad a continent or her countries so bad a place to live. But we should look into the bad cultures and make effort to stop them. These bad cultures not only cause grief and sadness to the people, but they also portray Africa as a primitive, if not wicked type of race...........

And Talking About Causing Someone To Madness…., it is not of culture to make a someone mad but, just like the case of Albinos and hunchbacks, there are some primitive and supernatural beliefs about gains that can be derived by making one mad. There is a secret belief that by holding somebody mad, the person could gain affluence or that the business will prosper more. Because of this supernatural belief, there are lots of mad persons roaming the streets in Africa.

But why intentionally cast anyone into madness, because of hatred or because of personal gain. Why should we be that wicked, why should culture allow it…..Permit me here, if I may chip in the case of this poor guy I know who is been castigated and branded as crazy because of issue of one or other aspects of culture. I mean, I see this guy leaves peacefully, neatly, quietly in his home, goes about his business peacefully. But some wicked traditionalists have organised to tell secret stories about him so that he will be regarded as crazy.
Why must we have culture that bring unhappiness to the people or maintain cultures that should be used for wickedness? The good thing about this, at least to the oppressors, this aspect of the culture is good, is that it is practised in secret. The cursed fellow who is been branded mad cannot hold any tangible evidence to stand, to protest and defend himself. More also the act is covered in secrecy and fear that no one can come out and stand for him. Anyone that dears to speak is either poisoned or made mad also.

A strong, healthy energetic person when castigated as mad will be ill-treated by people around him, even with all sort of witchcraft. Many following to treat him/her likewise due to fear. This brings a lot of depression, thinking, most cases loss of confidence to the poor fellow. Eventually, he falls sick.

Culture, should it be used for wickedness? Why hold strongly to practises that other parts of the world have phased out knowing that they are bad. For example, why cast someone mad just because of hatred. You confuse people with custom and tradition so that they fearfully help you to castigate him. Eventually the guy falls sick due to ill treatment from people…finally you say ‘I said it, he was mad’………Who then is sane?