Africans are warm and sociable set of people. We are blessed with
vast cultural heritage which range from the way of marriage,
the unique, warm and cheerful way we welcome visitors,
celebrating food, social age grades and meetings,
traditional wrestling, to the way we cooperatively
mourn our dead ones.


Traditional marriage….In Africa, marriage is seen as a great institution. That is why it is always celebrated like no other. This takes stages from the day the man sees the girl of his choice, to the day he takes his parents to go and see the parents of the girl informing them of his intention to marry their daughter, to the day the girl goes for ‘visiting’ at the man’s family house. The main day is the day of the Final traditional wedding, popularly known as ‘Igba Nkwu’ or Nkwu ukwu [Big wine day] in the eastern part of Nigeria.

This stage is a day characterised by merriment and celebration. Palm wine is bought in large quantity. A large number of people are invited from both families and well-wishers. The bride and the groom will dress in uniformed traditional attire. The bridal train and the groom's men will also appear on uniformed traditional attire. There will be lots of food and lots of drinks [In fact, people who can eat a lot and drink a lot are normally specially selected and invited to the venue]. There is no limit to this, but there is always a set standard. How wealthy the groom is determines how much he can provide. The "seeking rite" will be performed here again, when the bride finds the groom there will dancing and merriment as the well-wishers spray money on them.

Most mothers give their daughters what they will need in their new homes such as cooking utensils, bicycles, cars, motorcycles, houses, freezers etc. There is no specification here, how wealthy the bride's family is determines what they will give to their daughter. After this presentation the bride's family will bless the couple and the groom will then take his bride home.

New Yam Festival……Yam is a large root vegetable that looks like a tube.  People often confuse a yam with a sweet potato.  Yams come from Africa while sweet potatoes are from Asia

In Igboland, the occasion of Iri-ji (new-yam eating) is a cultural festival because of its significance. It is a day of merriment and great happiness, a day everybody have been waiting for [After the months of hard labour and expectancy for the yam to mature, nobody is allowed to harvest and eat until it is announced – a day to eat [hence, the new yam festival day]. Individual communities, as agrarian people, have their days for this august occasion during which assortment of festivities mark the eating of new yam. To the Igbos, therefore, the day is symbolic of enjoyment after the cultivation season. Emeka Odumegwu-Ojukwu, the star guest at one its occasion, captured the importance vividly when he described "the new yam festival, in our tradition, as the culmination of a work cycle and the beginning of another."

That perhaps explains why in a traditional Igbo setting invitation to the festival is usually thrown open. What this means,  is that there is abundant food for not just the harvesters but friends and well-wishers alike. New Yam festival is an annual harvest festival and is practised throughout West Africa [especially Nigeria and Ghana] and other African countries and beyond.

Masquerade Dance…     Masquerade dance is a common culture in Africa . Four main types of masquerade are identified by the roles they play: those who embody deities or nature spirits and to whom sacrifice is made to assure the fertility of land and people, those who embody the ancestral spirits, those who placate the spirits through their dance, and those who perform principally as entertainers. 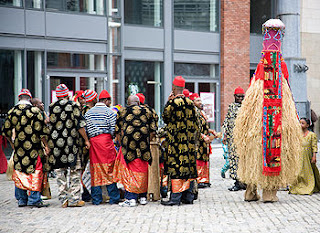 The type of mask influences the style of the masquerade dance. The Ikpelweme ancestral masquerades of the Afemai people of Bendel State, Nigeria, wear richly coloured, close-fitting costumes with face masks and elaborate headpieces of embroidered cloth, which allow for a dance that accelerates into a climax of rapid, abrupt movement. The Egungun ancestral masquerades of Yorubaland appear in a wide variety of loosely flowing cloth or palm-leaf costumes, often with carved headpieces. The heavier the mask, the less freedom for dance. For example, Epa masquerades of the Ekiti-Yoruba carry carved helmet masks with elaborate superstructures whose weight allows only for the type of movement.
Secular masquerades that perform as entertainers are mostly played during festivities, new yam festivals, burial ceremonies, Chieftaincy coronations, etc. And also in some communities they are played to add to the glamour and merriment of Easter and Christmas celebration.

Traditional wrestling…..This is one of the traditional sports in African and is carried out mainly by young and energetic youths. In many towns, the sport is taken very seriously and of great importance. Yearly competitions between communities are staged. Before each year’s competition, each community select and prepare their wrestler who will represent them. They have to present their best man because victory is of great price and of great importance.

On the D-day, all the communities gather at a selected community’s town center with their wrestlers and followers. The young maidens and some other dance groups present their dance before commencement of the competition. It’s of great entertainment and celebration. Great expectation, not only because of the price, which in the olden days may include the hand of the princess in marriage to whoever emerges the final victor, but because the final winner is regarded as the strongest man in the town. Also the winner’s community is feared and regarded as the strongest community


There are many, many other good cultures that Africa is made up of that keep us the happy and healthy people that we are today. Many of these I will write and post later on.